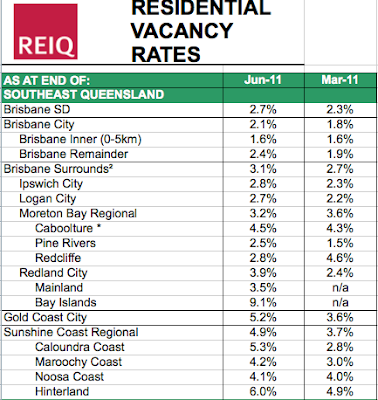 After the temporary surge in demand for rental properties following the natural disasters at the start of this year, Queensland’s rental market has returned to a more even keel, according to the Real Estate Institute of Queensland (REIQ).

The REIQ residential rental survey conducted at the end of June has shown vacancy rates across most of the state returning to more normal levels following the extreme weather conditions and peak demand of earlier this year.

“In some other much-needed good news for our property market, investors are also again starting to take an interest in Queensland. The latest ABS lending finance figures show the number of investment dwellings financed in Queensland over the June quarter increased about 16 per cent with investors now accounting for 30 per cent of the market.”

In Brisbane City, vacancy rates across the local government area (LGA) have eased to 2.1 per cent however this easing in rental demand occurred in the middle to outer-ring suburbs alone.

Agents in the inner Brisbane suburbs report units are letting much more quickly, with young professionals in particular willing to pay higher rents for inner city living and modern accommodation.

Vacancies are currently taking one to two weeks to relet in the inner suburbs while other parts of Brisbane are taking a fraction longer, according to property managers at REIQ accredited agencies. On average, listings are receiving two to five applicants across the LGA.