Buyers of new apartments in Brisbane sell at a loss

This blog post, from PropertyUpdate, is worth reading.  Many buyers of off-the-plan apartments paid too much.  But this is old news!  I have been saying that for years on this blog.
No comments:

In talking with real estate agents in inner Brisbane, they are telling me (for what it is worth) that:

There are different trends for the apartment market in different parts of Brisbane.  For example, West End and The Valley may be oversupplied at present, but there is an undersupply of large quality apartments in the Western Suburbs.

Place Projects have produced an interesting report, in two parts, that is worth reviewing:

"It’s no secret that the Brisbane apartment market has suffered in recent periods. As shown in the graph below, each of the three regions have experienced varying amounts of decline over the past two years.

The Inner Ring does however, remain to be the most expensive region to purchase an apartment. During the six month period ending December 2016 apartment prices sat at $468,000, compared to $445,000 in the Middle Ring and $380,000 in Brisbane’s Outer Ring. Longer term, the Middle ring has experienced the highest price growth, with median apartment prices increasing by 3.5% per annum over the past ten years, followed by the Inner Ring and the Outer Ring, recording 2.7% and 2.3% price growth per annum respectively over the past ten year period." 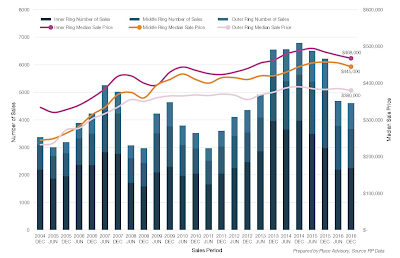 The real estate agent's industry group, REIQ, released a report this week into the Queensland residential property market.  From the REIQ press release, which is always somewhat optimistic:

"THE house market has rebounded from a period of low listings with a surge of stock, in some markets as much as 100 per cent more in the March quarter, according to the REIQ’s March Quarter Queensland Market Monitor.

Looking at southeast areas where the market is performing well, the Gold Coast and Sunshine Coast were the two strongest performing markets in Queensland again this quarter, outperforming Brisbane (as they did last quarter).

The Sunshine Coast continues to grow and, along with the Gold Coast, these centres formed the top two most popular migration destinations for people moving within Australia in 2016.   More than 12,000 people moved to these two coastal destinations (excluding overseas immigration) last year, according to ABS data.

The unit market over the past 12 months has begun to show signs of easing, with the annual median unit price falling 1.9 per cent to $445,000.  However, that slight easing doesn’t represent the whole story for Brisbane’s unit and townhouse market.

There are suburbs that have done well this quarter, including Albion (up 5 per cent since December), Bulimba (up 26.8 per cent this quarter), Indooroopilly (up 18.5 per cent), New Farm (up 7.5 per cent), Rochedale (21.1 per cent), Taringa (4.8 per cent) and Toowoong (up 3.2 per cent since December).  [Editor note:  this is likely because of new apartments being sold for the first time, not price increases in existing apartments.]
Brisbane LGA suburbs where units have done well over 12 months and five years include:


Units are becoming more popular with Queenslanders. CoreLogic has reported that 17 per cent of Queenslanders live in an apartment, just behind New South Wales’ 22 per cent and ahead of Victoria’s 15 per cent.

“The REIQ is confident the long-term future of apartments is secure and particularly in the inner-city where such exciting projects as Queen’s Wharf and the Howard Smith Wharves are adding to the night-time economy of inner Brisbane.  Added to South Bank, Milton’s Caxton Street and the Barracks, the West End, and Eat Street Markets, this is a diverse and vibrant inner-city and the demand for inner-city apartments will continue to grow over time,” Ms Mercorella from REIQ said.
No comments:

From their recent report for the March 2017 quarter:


As expected, the March 2017 quarter brought another period of subdued sales activity across Inner Brisbane’s off the plan apartment market as sales momentum continues to soften.

The Inner Brisbane apartment market saw just 272 unconditional transactions take place throughout the rst quarter of 2017, a substantial decline of 67% from the same period 12 months prior, which recorded 828 unconditional sales. Meanwhile, the weighted average sale price recovered over the past 12 month period, increasing by 5% from $602,415 in the March 2016 period to $629,963 in the March 2017 period.
The Brisbane CBD saw very little activity during the March 2017 quarter, with just 16 unconditional transactions recorded for the period. With no new projects released throughout the quarter, the CBD continues to sell down current apartment stock.

A weighted average sale price of $668,750 was recorded for the three month period, re ecting a 3.8% decline from the previous quarter, indicating a slight increase in the level of investment stock that transacted during the period. Brisbane Skytower recorded the highest number of unconditional transactions across the CBD market during the March quarter, recording a total of 12 sales.

A total of 225 out of 1,498 apartments remain for sale across four projects in the CBD including The Midtown, 111 Quay Apartments, Skytower and Mary Lane. 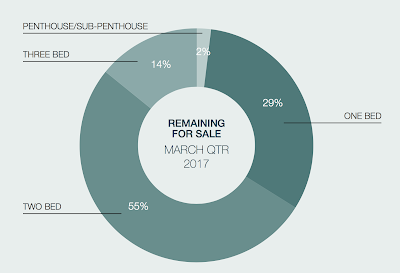 In 2016, the Queensland State Government introduced an additional foreign acquirer duty surcharge (AFAD) which applies to transactions involving interests in what is called “AFAD residential land”.

In a welcome development, no changes have been announced to the existing Foreign Acquirer Transfer Duty Surcharge. The surcharge rate will stay at 3% (which is significantly less than the 8% and 7% surcharge rate that applies in New South Wales and Victoria, respectively).

However, the draft legislation proposes some additional changes to the operation of AFAD in Queensland.
·         The draft legislation expands the meaning of AFAD residential land to include “chattels” in Queensland which “can be directly linked to, or is incidental to, the use and occupation of the land”.  Currently, only residential land and not chattels attract the surcharge rate of duty.  The move to include chattels in the surcharge duty base is a response to Government concern about the way in which value can be allocated between land and chattels.  The changes remove any incentive for value shifting.
·         The draft legislation will expand the application of AFAD to certain agency transactions affecting AFAD residential land.  Currently, the agency provisions in the Qld Duties Act permit a foreign principal to avoid AFAD by using a non-foreign agent to enter into an agreement for transfer (i.e., when duty is originally assessed).  The proposed amendments effectively mean that, where a principal is a foreign person at the time the relevant transfer of AFAD residential land occurs, the agreement will need to be reassessed as if AFAD applied to the agreement.
·         The draft legislation also proposes removing the ability of foreign companies (pre-incorporation) to acquire AFAD residential land without incurring an AFAD liability through the use of an Australian entity to enter into an initial agreement for the transfer of land prior to the foreign company’s registration.  Currently under the Qld Duties Act, the initial agreement for the transfer would not attract AFAD and the subsequent transfer to the foreign company (post-incorporation) would be exempt.  The proposed amendments will require such an agreement to be reassessed as if AFAD applies and the subsequent transfer will not be exempt unless the duty (including AFAD) has been paid.
4 comments:

The REIQ reports, unsurprisingly, that the supply of apartments in Brisbane is showing an upwards trend, and is an oversupplied market.  I suspect the trend is that things will get worse for sellers, rather than better, over the next 12 months.

According to the REIQ, which is a real estate agents' industry group, the Brisbane apartment market is falling. 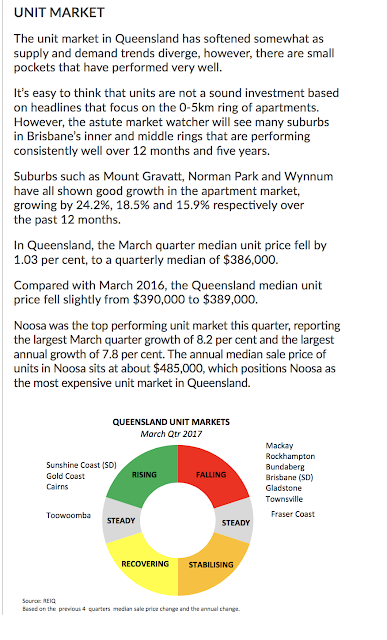 The Federal Government has proposed adjustments to depreciation legislation in the 2017 Budget.  Investors who purchase existing apartments after 9 May 2017 will be worse off in respect of depreciation benefits, which will impact cash flow.
Under the new rules which are yet to be legislated by Parliament, investors will be able to depreciate new plant and equipment assets within a new property and items they add to their property; however subsequent owners who acquire a property after 9 May 2017 will not be able to claim depreciation on existing plant and equipment assets.
Investors will still be able to claim qualifying capital works deductions, including any additional capital works carried out by themselves or a previous owner.
The budget notes were clear that existing investments will be grandfathered. This means that anyone who has purchased a property up until 9 May 2017 will be able to claim depreciation as per normal.
See also BMT blog
No comments: