"On the unit front, Wooloowin, Annerley, Moorooka and Camp Hill all priced under $350,000, are tipped to give good returns next year. The surprise additions of inner-city Fortitude Valley and East Brisbane are also considered affordable areas for unit buyers.

"For people who are priced out of the city itself, these areas are a good option," Mr Kusher said.

"Fortitude Valley in particular has got a really good rental yield at the moment and stock there is quite varied. Overall, rental growth is starting to improve, so for those people who have perhaps lost money in shares, more investors will be attracted back to property."

At the beginning of 2008, I made a number of predictions in this post.

The predictions were mostly wrong!

The Brisbane apartment market did not grow significantly in 2008, and took a minor step backwards. At present, there are fewer buyers and more sellers. For some off-the-plan developments, no sales have been made for months. Second tier buildings and buildings with more than 200 apartments have not done well.

So I will be careful with my predictions for 2009:

I still believe that quality inner city apartments in Brisbane will do well in 2009. Provided there is no significant unemployment and provided that foreign students continue to come to Brisbane, vacancy rates will remain low.

In 2008, only four new inner city apartment buildings completed and settled. These were Evolution (over priced), M on Mary (which has mostly 1 bedroom apartments, and the developer is now in liquidation), Flow at West End and Iceworks at Paddington. In 2009, no new large inner city apartments will settle. Groundwork has started on Mertion's Soleil and the Trilogy Tower project, but these will no complete until 2012. Mirvac's Tennyson Reach project will settle two buildings in 2009, and FKP's SL8 at West End will also probably complete in 2009. So not much new stock.

So here are some predictions for 2009: 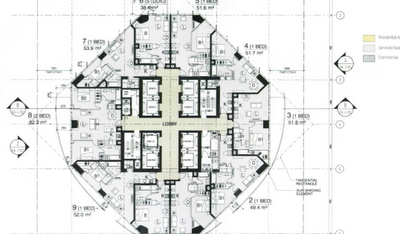 Here is a floor layout, as submitted to council by Meriton. It shows 10 apartments per floor, with a mix of studios, 1 beds and one 2 bedroom apartment. The apartments have no balcony, and are small. The 1 bed hotel suites in Trilogy Towers are larger than the 1 bedroom apartments in this proposed building.

"He said two factors in the past two months had prompted the downgrade of its residential inventory.

He said there had been a "massive downturn" in the top end of the residential market.

Secondly, the company had made a "conscious decision" to sell some high-end projects outright at a discount to their carrying value.

Mr Quinn said: "The first home buyers are well and truly back because it is now cheaper to buy than to rent."

Stockland had started to reconfigure some high-end projects to create more affordable products.

What would you pay for a new 2 bedroom apartment at the southern end of West End, with nice views of a factory roof, surrounded by industrial buildings, walking distance to nothing, an irregular bus a few times a day, brown carpets and "a minimalist look"? How about $579,000 in Ferry Road, West End? That just seems extremely high to me. Buyers beware!
No comments:

Lord Mayor Campbell Newman promised to introduce the policy from the third quarter of the 2008-09 financial year, which starts on January 1.

The scheme was proposed at June's Brisbane City Council budget and - suggested lifting the general rate paid by unit owners so they pay an equivalent rate to home owners in a property of the same value."

According to the NY Times: See New York Times for this interesting story.
No comments:

Email ThisBlogThis!Share to TwitterShare to FacebookShare to Pinterest
Labels: prediction 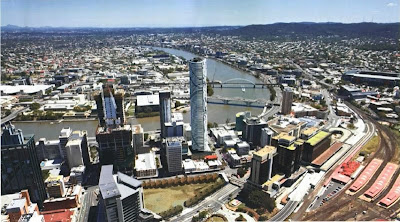 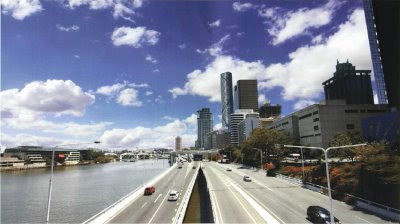 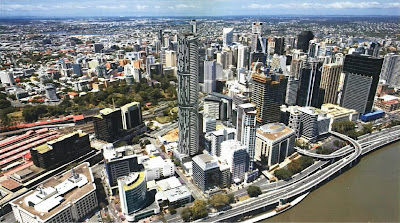 Meriton has applied to build a second apartment building in Brisbane. It is located at 43 Herschel Street, Brisbane, near Roma Street Station. It is 73 stories, with over 400 apartments, and a basement 10 floors underground parking.
No comments:

I am always surprised to read commentary about Gold Coast apartments which is so positive -- when the market is very dead, nothing is selling, and prices are falling for what is selling. For apartments that are holiday rentals, most owners will receive low returns, not enough to cover outgoings. Yet, agents still talk the market up. Here is a more realistic story:

GOLD Coast real estate may fall a further 20 per cent over the next year, according to one of the city's leading property forecasters. Author of the Midwood Report Bill Morris said while the Gold Coast's median house price fell by only 3.7 per cent in the September quarter, it marked the start of a long and consistent drop in property values that could last 18 months.

Mr Morris last night told a group of property watchers at a seminar unveiling his November-quarter Queensland Investment report his gloomy projection was based on the skewed correlation between house prices and rental returns.

Mr Morris said that while rental returns languished around 4 per cent, house prices would continue their downward slide. "Because of the increase in house prices over the past five years, which has been about 100 per cent, despite declining demand, it has meant rental returns have gone down significantly and are now unacceptably low," said Mr Morris. "They are currently about 4 per cent gross which is stifling the investment market. Really, 5 per cent is acceptable and to do that you can either increase rents by 20 per cent or have a decrease in house prices by 20 per cent."

Investors would only return to the market once rental returns became more attractive, he said.

Mr Morris's analysis came on the same day that AMP chief economist Shane Oliver also predicted a rough ride for Gold Coast property. Mr Oliver yesterday told The Gold Coast Bulletin he expected property nationwide to fall an average of 10 to 15 per cent, but predicted the Coast may fare worse. "I see coastal locations where people had a holiday home coming under pressure," said Mr Oliver.

Mr Morris expected a market recovery would take 12 to 18 months."

Not all Doom & Gloom

"THE economics of Australia's $3.3 trillion housing market is widely misunderstood, with sensationalist claims that a housing bubble caused the global credit crisis and that Australian house prices will fall by 30 per cent to 50 per cent. In fact, the latest RP Data-Rismark Index results show that Australian house prices declined by just 0.8 per cent in the 12 months to October this year, and increased during the most recent three months.
...

In Australia, the hyperbolic predictions of economists Steve Keen and Gerard Minack that house prices will fall by 30 per cent to 50 per cent have been relentlessly recycled in newspapers and purportedly credible programs such as 60 Minutes and The 7.30 Report.

The doomsayers' claims are based on the assumption that housing affordability is at an all-time low.

They dismiss the fact house prices are determined by supply as well as demand (affordability is a demand-side factor) and conclude that prices must fall by some arbitrarily large margin. Keen likes to shock by quotingstatistics about the rise in household debt without acknowledging that debt-servicing ratios have remained unchanged thanks to vastly lower real interest rates, the emergence of two-income households and higher real incomes.

Recent analysis by the Reserve Bank of Australia has comprehensively demonstrated that housing affordability is not at an all-time low. According to one of the Reserve Bank's benchmarks, the representative household in June 2007 had more real disposable income left over after purchasing a home and servicing a 90per cent mortgage than at any other time since June 1982.

The bank also found that the representative household could afford to buy 33 per cent of all homes in June 2007, which, although less than the historical average of 45 per cent, was markedly better than the 13 per cent of homes available to it in June 1990.

Importantly, the Reserve Bank's present 4.25 per cent cash rate is considerably lower than the 6.25 per cent rate that existed in June 2007. Since mortgage rates peaked at 9.6 per cent in August, the Reserve Bank has pushed them down to about 6.7 per cent, with markets predicting that they will be less than 5 per cent by mid-2009. At the same time, house prices have not appreciated...."

"The Reserve Bank believes Australia's housing market is leading the US by three years, having entered into its downturn in 2004. There is also a consensus between the Reserve Bank and most economists that the doomsayers' predictions will be proven wrong. A striking counterfactual is the 1990-92 recession, when unemployment hit 10.9 per cent yet house prices rose by 2 per cent a year according to the Australian Bureau of Statistics.

The media would do well to interrogate sensationalism."

From a Pradella newletter:
"Despite Brisbane's uncertain property market, buyer confidence remains strong for Waters Edge with an unprecented $40 million in sales made since its launch. Forty-eight of the 221 apartments have sold to a mix of investors and owner-occupiers, as buyers look to quickly capitalise by purchasing at the unique site."

"Consisting of two eight-storey buildings, named Drift and Reach, one, two and three bedroom apartments are available, priced from $540,000.In addition to the apartments, there are 32 premium absolute riverfrontage apartments called the Riverfront Collection that have a total area of between 188-332m2, consist of 3 bedrooms, 2 bathrooms plus a separate multi-purpose room and study, priced from $1.795 million are for buyers searching for the ultimate in inner-city luxury living."

"Claims that the Australian property market would in 2008 experience a major downturn have been proven incorrect based on the most recent findings of the RP Data-Rismark Hedonic Property Value Index, which in October again showed that Australian capital city property prices had increased for the second consecutive month. ...

Based on RP Data-Rismark Index results, RP Data head of research Tim Lawless believes that the doom and gloom merchants have misunderstood the fundamentals and the diversity of the Australian residential property market by predicting that Australia was headed for a market-wide implosion in 2008.

“The facts are that over the past 12 months Australian property values have declined by just 0.8 percent which is a phenomenal result when compared to the S&P/ASX 200 index which reported a decline of 40.5 percent,” Mr Lawless said. “The October RP Data-Rismark Index results reinforce my suggestion that the Australian property market has moved through the bottom of its cycle.” ...

For savvy investors the timing to enter the market is now better than ever according to RP Data’s Tim Lawless – “For investors who are willing to go against the flow, buying conditions are exceptionally strong and yields are improving every month,” he said.

“The fundamentals underlying the Australian property market are extremely robust. Investors need to take into account current supply constraints, infrastructure delivery, immigration, vacancy rates, rising rents and expectations that interest rates will continue to fall. These are the basics that should fuel capital gains for investors.”

A car park in down town Brisbane appear to add about $60,000 to the value of an apartment. A two bedroom apartment without a car park is virtually unsaleable.
FindACarPark is a good site to look at to see the rental value of a car park in Brisbane - seems to be about $400 to $500 per month to rent. When I looked, no car park was listed for sale in Brisbane.
See also this site.
No comments: