USA property market is turning around?

From my conversations with U.S. brokers (real estate agents), it appears that in some markets in the United States, there are now more buyers than sellers, with multiple offers on properties for sale.  This view is supported by a recent USA Today article:

Seller's market returns as homes for sale drop in some areas

Chinese buying up Australian apartments: They are cheap!

See story in SMH
Meriton chief Harry Triguboff said 80 per cent of his customers are Chinese.  One reason is that foreign buyers can buy an unlimited number of apartments off-the-plan.  A good reason to avoid off-the-plan apartments today.
No comments:

Some extracts from a recent SMH article (and the SMH is usually pro-property, because its biggest advertisers are real estate agents):

Christopher Joye, an executive director of Yellow Brick Road Funds Management, predicted that over the next 10 years, house price growth would be about half what it had been in recent decades.

An interesting decision regarding Sam Vecchio, who is the developer of the Rive apartment complex at Breakfast Creek.  Sam Vecchio's prior development was Fresh at Taringa.  A bad job was done on the stippling, and a few years later, it is still not fixed.  Vecchio has stacked the body corporate committee with family members, some of whom do not turn up to meetings.  Vecchio's business practices have been called into question.  As the Commissioner has found:  "The applicant disputes the committee resolution on the basis there is a conflict of interest between the committee member, Sam Vecchio, and Phoenix Drywall (the individual selected to perform the repairs). The applicant says Phoenix Drywall is currently working for Sam Vecchio. ... I am satisfied a serious legal question exists as to whether the costs involved in the resolution dated 16 March 2012 are reasonable."  See decision.
1 comment:

A recent decision holding that a "no pets policy" was unreasonable.  See Palm Grove Village.

In another recent decision, Bay Vista Apartments, the adjudicator decided that it was permissible for a potential resident (owner or tenant) to obtain approval prior to becoming a resident:

In my view, preventing consideration of pet requests by or on behalf of a prospective lot owner or occupier creates unreasonable difficulties for an owner in selling or leasing their lot. It is entirely understandable that people with pets would not wish to rent or buy a lot without the prior assurance that they will be able to keep their pets. If they are not permitted to seek approval until they move in, they will be in an invidious position if approval is not then given.

I am at a loss to see what possible disadvantage there could be to the Body Corporate from deciding the matter before a sale or lease is completed. It could seek reasonable further information about the prospective occupant or pet if they wished. If approval is given conditional on the sale or lease being completed, it lapses if the sale or lease does not proceed. By deciding the issue before the occupancy commences, they also avoid the situation of an unapproved pet being brought on the scheme while a decision is pending."
No comments:

According to the OECD, Australian households remain heavily geared with a high ratio of household debt to disposable income(183.7%), but this has declined from the pre-GFC level of 186.4%.  In 2000, this ratio was 124%.  The OECD average was 98%.  See story here.

Many Australians are prepared to borrow heavily to buy a residence, believing that "rent money is dead money".  But that is not always the situation.  Buying a house or apartment for the short term is often a bad decision.  And if you have to move with your job, as some Qantas engineers found out recently, owning a house can be a liability.
No comments:

"Property values across the combined capital cities of Australia showed renewed softness in the latter half of April with dwelling values falling by -0.8 per cent after a stable first quarter. Over the three months ending April 30 the RP Data-Rismark Index has seen values rise by 0.3 per cent. On a year to date basis, dwelling values are now down -0.7 per cent.

Values were down across five of the eight capital cities over the month of April, with Hobart (-2.9%), Melbourne (-1.7%) and Brisbane (-1.3%) recording the largest falls. On a 12 month basis capital city dwelling values have fallen by -4.5 per cent with the weak conditions in Melbourne (-7.0%) and Brisbane (-6.4%) dragging the weighted average down.

RP Data‟s research director Tim Lawless said that the housing market gains seen throughout February and March, which delivered a flat first quarter result, have now been mostly offset by the -0.8 per cent fall over the month of April." 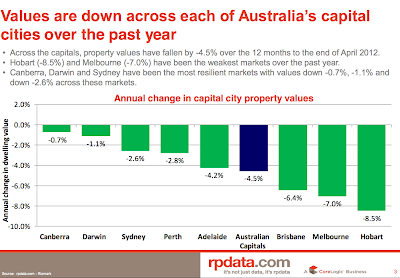 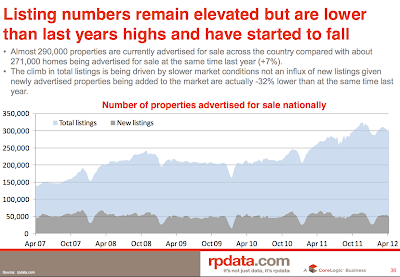 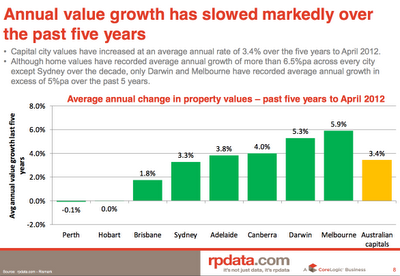 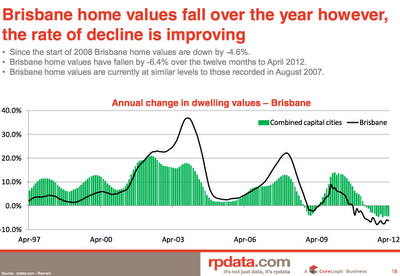 It is rumoured that Suncorp has pulled out of the Southpoint deal, because the developer could not get finance.
See here and here.

Australian residential property will now be less attractive to foreigners after the Federal Budget last night.  As a large number of foreigners buy apartments off-the-plan in Queensland, this market for new apartments will be impacted by the changes, and the impact is negative.

The Government will adjust the personal income tax rates and thresholds that apply to non residents’ Australian income. From 1 July 2012, the first two marginal tax rate thresholds will be merged into a single threshold. The marginal rate for this threshold will align with the second marginal tax rate for residents (32.5 per cent) and will apply to all taxable income below $80,000. From 1 July 2015, the same marginal rate will again rise from 32.5 per cent to 33 per cent.
Source:  KWM
No comments:

No Apple Store for M&A

Is Laing O'Rourke misleading people, or just careless?  Last month, to much fanfare, it released a press release to report that it has signed up a two level Apple store at its McLachlan & Ann (M&A) building in the Valley.  See Press Release and prior post.

So no Apple Store for M&A, just a U.S. electronics store.  So that decreases not increases the appeal of M&A.
No comments:

Genworth Says Queensland is a Problem

U.S. mortgage insurer, Genworth, that has operations in Australia, released a report yesterday to Wall Street regarding its Australian residential mortgage insurance business.  See report here.  The report says that its overall performance by geography is solid, with the exception being Queensland. 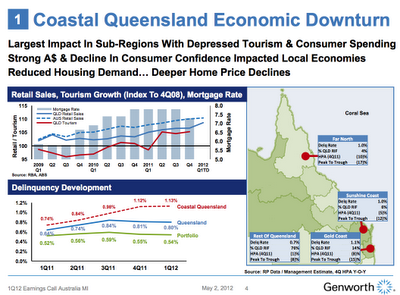 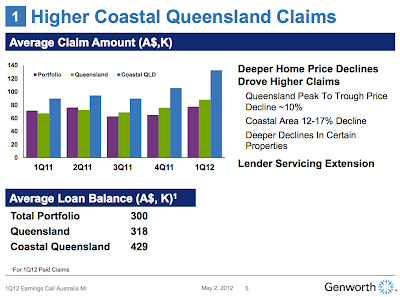 The concentration of negatively geared properties in lower income and older age cohorts has potentially important ramifications for the Australian housing market. The risk of widespread selling of investment properties is likely to intensify once Australia’s 1.1 million negatively geared investors come to the realisation that there is little prospect of a resumption of past strong rates of capital growth and they are stuck with a loss-making investment.