Four recent articles in the AFR are of interest in relation to the impact of China on Australian property.

"Spike in approvals for foreign investment in housing" (AFR, 12 June 2014, p. 36): The FIRB has approved a big jump in applications to buy Australian housing.  In dollar terms, the investment approved is up 67%.

"Chinese buyers key to market: Triguboff" (AFR, 12 June 2014, p. 36):  Meriton raised the issue of whether those who were allowed to buy homes because they were temporary residents, sold them when they ceased to be Australian residents.  In the 2012-13 year, 43.7% of FIRB approvals were for temporary residents to buy established dwellings, because foreign buyers who do not have permanent residency, can only buy new homes.  Meriton pointed out that the annual report of the FIRB did not report on compliance.

"We are part of the Chinese market.  The buyers compare me [Meriton] with the prices in Shanghai and Beijing.  If the price falls in China, that will affect us," Mr Triguboff said.

"China's housing vacancies signal property bubble" (AFR, 12 June 2014, p. 10): A report estimates that there are 49 million vacant homes in China, resulting in a vacancy rate of 22.4%.  "Once expectations change, the high vacancy rate will puts lots of pressure on prices and we could see them collapse."

"President targets naked civil servants" (AFR, 11 June 2014, p. 14): A group of Chinese bureaucrats, dubbed the luoguan or naked officials have become the latest target of President Xi Jinping.  They move their families and money to foreign countries.  "No one know how much this new approach will affect universities and real estate markets in favoured destinations like Australia as the numbers are hard to pin down.  But they are not small."  There are estimated to be about 1.2 million naked officials at the end of 2012.

"House prices second highest in the world" (AFR, 12 June 2014, p. 5): Australia may have the world's second-most expensive housing market behind Belgium, according to the IMF.
No comments: 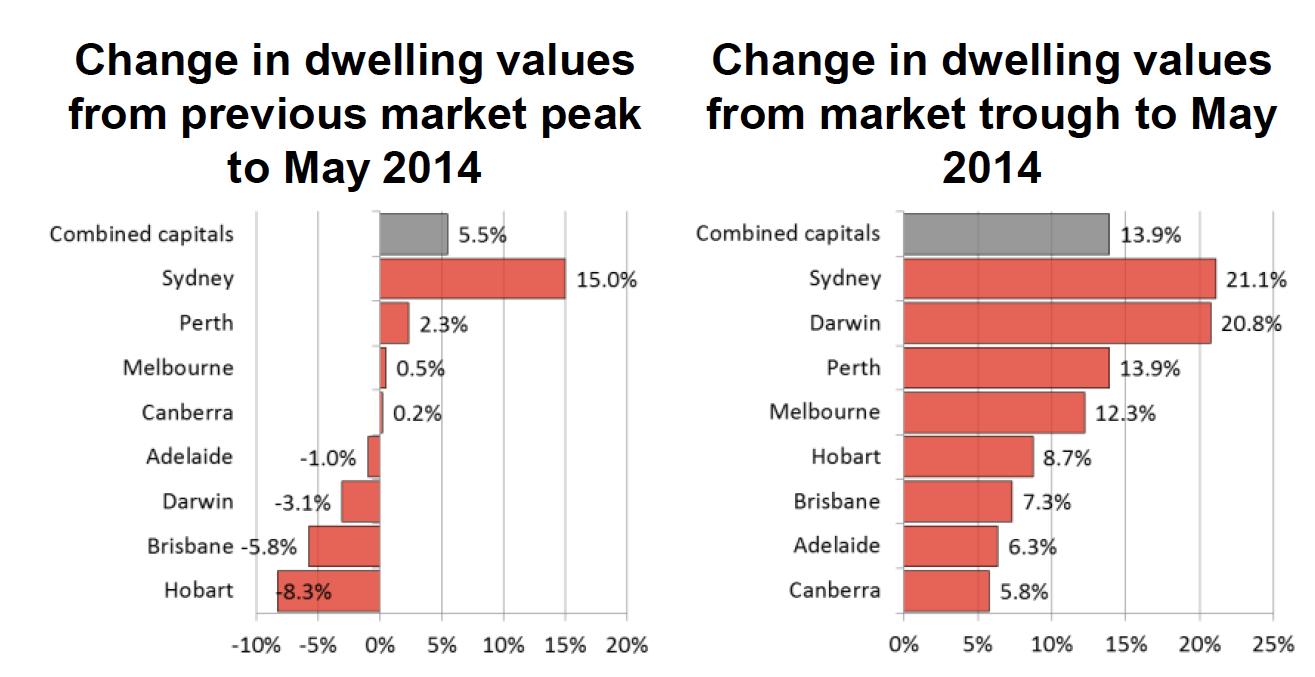 Over the growth cycle to date, which commenced in June 2012, capital city dwelling values are up 13.9 per cent. According to Mr Lawless, the surge in values has largely been driven by strong market conditions in Sydney (+21.1 per cent).

“The month-on-month fall in capital city dwelling values is likely due in part to seasonal phenomenon, but may also be indicative of a broader trend towards cooler housing market conditions.   Historically, housing market conditions have softened in April and May as the market rebalances from what is typically a seasonally strong first quarter and also as a results of cooler climatic conditions during the autumn and winter months. Outside of the seasonality, we have been seeing signs that the housing market is at or approaching the peak of the growth cycle.  The rolling quarterly rate of growth peaked in August last year and we have been seeing weaker auction clearance rates since late February when the capital city clearance rate hit 76 per cent,” Mr Lawless said.

By way of its cycle, Australia’s housing market has shown that a growth phase usually lasts around two years. Mr Lawless said that with affordability becoming more challenging and rental yields substantially compressed across Australia’s two largest cities, we wouldn’t be surprised if the growth trend moderated further over the year.

A recent deterioration in consumer confidence reported in the Westpac/Melbourne Institute Consumer Sentiment Index shows that this factor may also be playing a role in the winding down of housing market conditions.

Current investor risk is very much concentrated within the Sydney and Melbourne markets where investor activity has been the most concentrated,” Mr Lawless said.

www.rpdata.com/indices
The May RP Data - Rismark home value index results out today confirmed a fall in capital city dwelling values by 1.9% over the month which, according to RP Data research director Tim Lawless, can likely be attributed to both seasonality and more moderate housing market conditions.

Thank you to readers and contributors.  This blog has just passed 500,000 page views.  And that does not include page views from the predecessor blog.  Thank you!
No comments:

Email ThisBlogThis!Share to TwitterShare to FacebookShare to Pinterest
Labels: blog

Tom Dooley (TDD) is launching their Skyring development at the Gasworks site in Newstead (30 Festival Place).  This area is a popular development area at present, with FKP, Devine, Mirvac and Metro all with off-the-plan and completed developments in this area.

The development has 23 floors, with 11 apartments per floor.

TTD is has a chart on their website, representing what rents they believe will be achievable.  Some examples from the 10th floor: 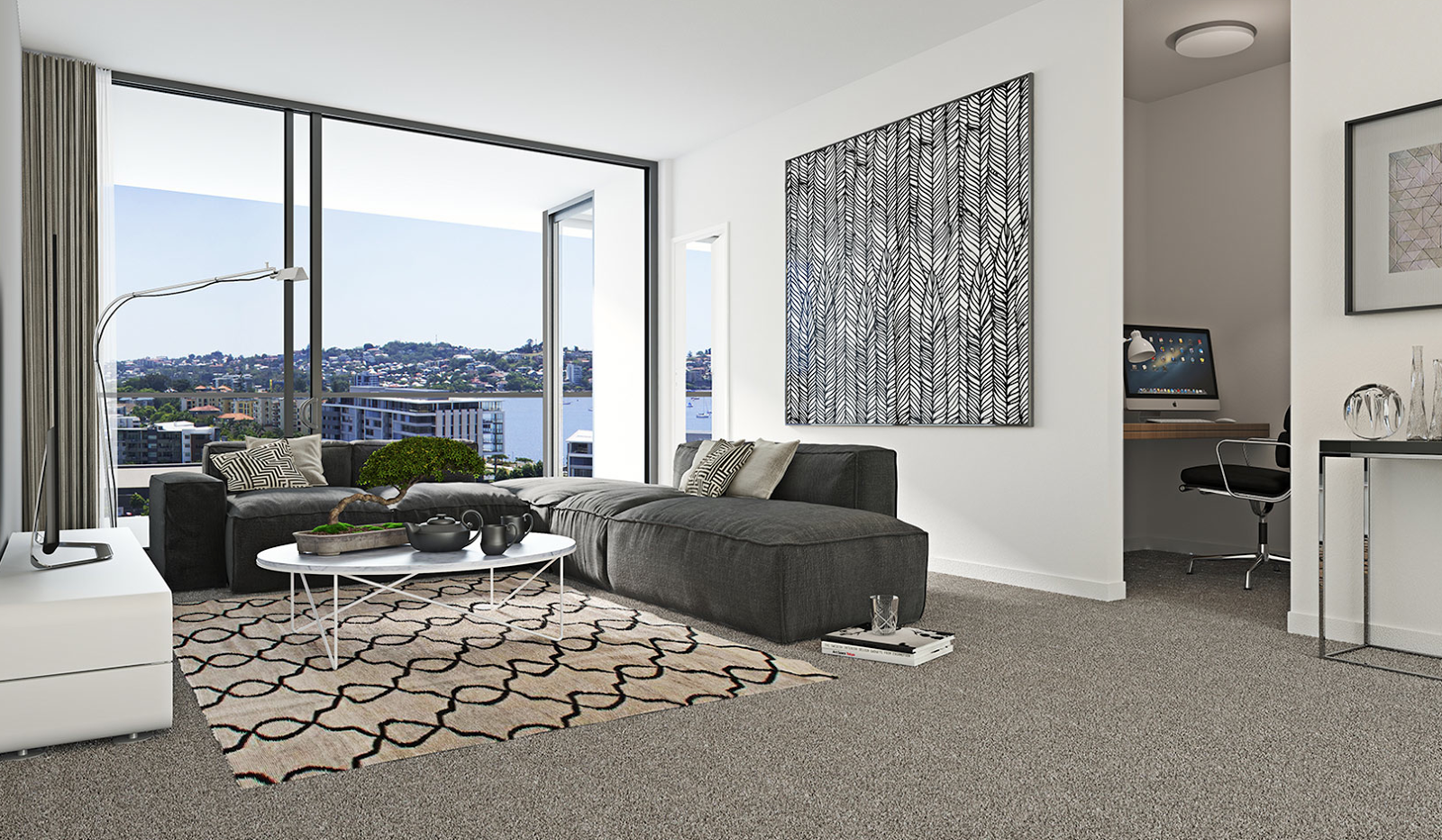 Some highlights from the report:

From a recent Ray White report by Colin Walsh:

"Admiralty Towers 1 continues to be one of the Brisbane CBD's most sought after resident apartment buildings with the recent complex improvements adding a fresh appeal.  Seven sales were recorded in 2013 with prices on the incline.  For the first time in a couple of years, there are two D Type apartments sold for $880,000 and $900,000.  This illustrates that buyers are sawing new opportunities in the complex and are prepared to meet seller's demands."

The D Type apartments are two bedroom, two bathroom apartments, and are over 130 sqm in size.  Apartment 44 is a D Type, and went to auction recently but did not sell at auction, and is now listed for sale for "over $825,000".  This looks like a great deal.  This apartment is one of the best two bedroom apartments available in Brisbane.