However, apartments in Brisbane performed very poorly when compared with houses.  In fact, apartment values have declined in Brisbane.

Some example recent sales in Brisbane city apartment buildings.  Some buildings are tightly held and have few sales.

Lost Views for some apartments in Brisbane

You have to be careful these days when buying an apartment, because with all the development in Brisbane, your view may disappear or change.

Here is an example of an apartment in Sebel Suites (95 Charlotte St) on the 30th floor, where the aspect was impacted by a building nearby.  There are many other apartments in Brisbane that have recently been impacted or may soon be impacted by pending construction. 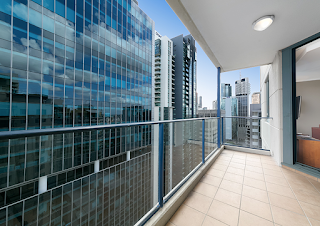 Prediction that Brisbane Rents will not fall

"Brisbane's booming inner-city apartment construction market has led many to speculate a fall in rental prices could ensue in late 2015 as the market is flooded.  However, Dr Wilson said that in Melbourne, where there have been record levels of inner-city apartment developments, rents have continued to increase, which could bode well for Brisbane investors, though not so much for renters."