"It is predicted that the residential market in Sydney will be the first market to move forward next year, ahead of the other property classes and markets in Melbourne and Brisbane, which won't see any growth until 2011," said Mr Hecek.

Mr Quinn told analysts and reporters that Stockland’s residential sales performance remained strong, particularly among first-home buyers, and there were signs of recovery among second- and third-home buyers.

Email ThisBlogThis!Share to TwitterShare to FacebookShare to Pinterest
Labels: stockland

"Apartments are leading the surge in Brisbane rental prices, with weekly bills soaring more than 13 per cent in the past year.

New figures released today show the median rental price for units in Brisbane has increased from $300 to $340 in the past 12 months.

The 13.3 per cent jump means Brisbane has experienced the largest increase in year-on-year unit rental prices of all the major cities in Australia, except for Darwin where the median unit asking price rose 14.3 per cent."

"For landlords and investors, rental yields are now approaching or exceeding mortgage rates, and in some areas positive gearing is a real possibility.

"This will provide some stimulus for potential investors to re-enter the market and take advantage of favourable conditions."

"Australian residential property markets are in much better shape than residential markets in Britain and the US. Higher lending standards in Australia mean there are fewer defaults forcing house prices down. There is a housing shortage and immigration, despite a cut, still remains strong." 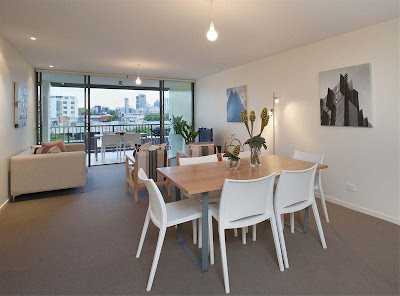 SL8 in West End is nearing completion. The building has an industrial look, and the apartments have good views of industrial sheds.

For most of these apartments, the second bedroom looks over the back (open) hallway. 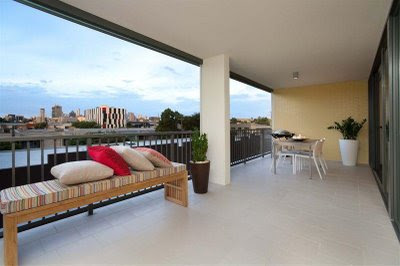 St Lucia - Visage and The Studio

Visage at St Lucia has sold out prior to completion. There are 26 apartments. Off the plan projects, if priced correctly, are still selling out. 2 bedroom apartments priced from $470,000. Developed by Aspect Property Group

This developer has DA to do a development within the University of Queensland grounds. Called "The Studio", this will be studio apartments for student.
No comments:

Most of the above were auctioned at the Ray White Sunday Auction
No comments:

"Increases in rents have seen yields for Brisbane houses and units (at 4.4% and 4.9% respectively) increase, and yields for houses are now back to levels last seen in 2002. This together with lower interest rates is starting to make a more compelling case for investors, and counter cyclical investors are starting to return to the market."

"Prices did not peak until early 2008 and have only come back 5% since then. Whilst there is potentially further downside in the short term, the market is likely to stabilise and the high levels of demand are expected to see growth return once the economy starts to pick up. Brisbane has generally had high demand for apartments and units, and this means that the fall in prices for other dwellings has not been as much as for houses.

"Matusik Property Insights analyst Michael Matusik says the most dramatic price falls are in Gold Coast suburbs where premium and tourism-dependent holiday units are in oversupply. "Developers that have sold 60 to 80 per cent of the development are now looking for a profit or to break even so they quit the project and advertise apartments that were $1.1 million for $900,000," he says."

"The Toowong Area unit market has seen a steady increase in median price during a five year period. Growth during this time was at a compounding rate of 9.6% per annum, with an average of 333 transactions per six month period. In the past year alone growth has climbed to register a median unit price of $410,000, equating to an increase of $43,000 or 11.7% from the previous year."

One Bedroom in Roma Street Parklands 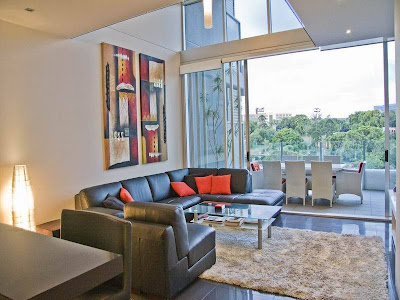 One bedroom for sale in Roma Street Parklands - Pinnacle - for $669,000. Nice apartment, but that seems expensive! Compare a one bedroom at Quay West for $450,000
No comments: