Summary of RP Data report:
Capital city home values increased by 0.6% in July after increasing by 1.0% in June
·         Capital city dwelling values increased by 0.6% over the month of July 2012.  Dwelling values are down -0.6% over the first seven months of 2012 and down -2.4% over the twelve months to July 2012.  Home values remain -5.9% below their historic highs across the combined capitals with falls from the peak ranging from -11.5% in Brisbane to -2.9% in Sydney.
·         Looking at value movements across broad price segments in the market to June 2012, the premium housing market is recording the largest falls (down -3.4% over the year) while the broad ‘middle market’ has been the most resilient with values falling by -2.0% and the most affordable suburbs have recorded value falls of -2.9%.

Sales activity showed a slight improvement in May however, there has been no significant improvement to date despite recent interest rate cuts
·         Estimated sales volumes are currently -14% below the five year average nationally and -13% lower across the combined capital cities
·         Compared to volumes in May 2011, sales volumes are currently -4% lower nationally and across the capital cities.

Rents continue to improve in certain areas and across specific product types while yields continue to trend upwards
·         Capital city house and rents have increased by 3.0% over the 12 months to July 2012
·         Gross rental yields for houses have improved from 4.0% last July to 4.2% currently and for units they have increased to 4.9% from 4.6% last year.

Vendor discount levels and time on market are trending lower but remain at elevated levels
·         Based on private treaty sales, it took an average of 60 days to sell a house in the capital cities in June 2012 compared to 68 days at the same time last year.
·         Vendors are now providing an average discount of -7.2% from their initial listings price, at the same time last year the average vendor discount across the capital cities was recorded at -7.6%

The number of homes for sale has been easing however, on an historical basis they remain at quite high levels
·         RP Data is tracking around 296,000 unique houses and units that are available for sale across Australia; that’s about 9% higher than at the same time last year.
·         New listings are actually -14% lower than at the same time last year.
·         More than half of the total listings are located in the non capital city markets despite the fact that only 35% of sales take place in these locations. 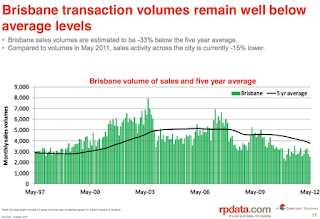 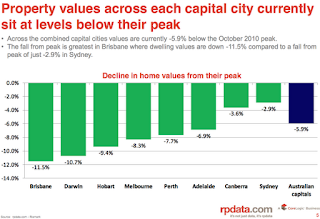 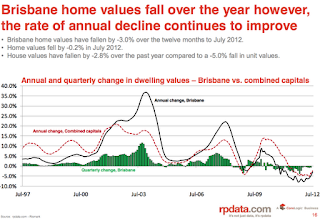 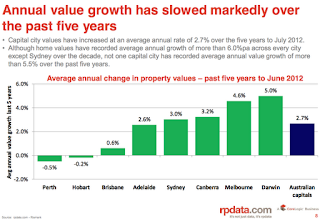 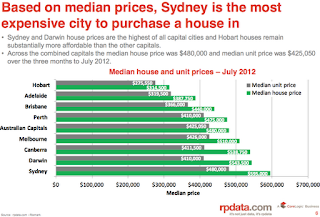