On 10 March, the AFR reported that there will be a "very messy end" to the apartment boom.  See AFR story here.  It says:

""In Melbourne the oversupply will be significant, in Brisbane it will be worse. It is an accident waiting to happen," said BIS-Shrapnel managing director Robert Mellor at the group's six-monthly Building Forecasting Conference."

Has the end already started?

Let's look at a recent apartment project in Brisbane, that recently completed -- The Milton at 55 Railway Terrace, Milton.  Some examples of the disaster there:

The onsite agents, Mint Residential, have a large number of apartments for rent.  And so do offsite agents.  The following are rent ranges, depending on floor, car parking etc:
The Milton won my award for the wildest advertising claims of 2010.  See this prior post.  In that post, I said:  "They have a sheet of paper showing investment returns for a 2 bed, 1 bath apartment listed at $650,000. The prediction is that this apartment will be worth $807,500 on completion of the project in 2013, and will be worth over $1M by 2016. The predicted rent is over $720 a week in 2013."

As can be seen from the above, this was in fact wildly inaccurate.

The Milton has a host of problems, not simply that it was sold for prices that are way above market price.  The development is on a train line, with half the apartments looking west and close to a brewery.  The river views are distant, and will be blocked by construction of apartments in front.  Body corporate for a 2 bedroom is about $4,800 a year.  See comments in prior posts.  It is very dangerous buying off the plan in Brisbane.

If The Milton is representative, then we are in for a very rough ride. 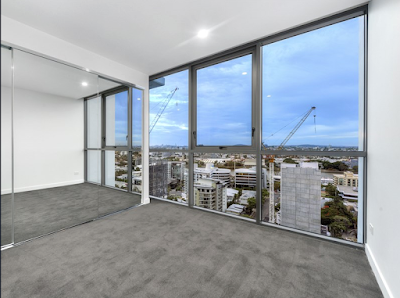 Jeff - you have rightly identified a number of issues/concerns unique to this building and I think your predictions of capital losses are probably right. However, I think it's a very big stretch to say that the sky is going to fall in on all our heads and this building is/was the canary in the coal mine - as you pointed out, the canary was already suffering from a multitude of diseases before it was taken into the mine.

ps: the article references an "explosive report" by Tepper and Hempton. No doubt these are two extremely clever practitioners of shorting the stock market, but nobody has had a chance to digest/critique the report because it hasn't even been released.

Crash - what crash? Never gunna happen, according to the optimists at https://brisbanedevelopment.com/ 70 storeys planned here, 91 there, 50 in another place - Edward St, George St, Margaret St, 2 in Queen St. Lots of lovely drawings, lot of lovely money for architects, lots of DAs going in. Biggest building boom in Brissie's history - IF they all happen. And of course nobody connected with the Bris Development site can imagine any proposed development not happening - once the DA is in, the thing is as good as built! But please, everybody, don't sign up to buy anything off the plan!