The sales of units and townhouses across Queensland have risen dramatically compared to last year, according to the latest data.  The Real Estate Institute of Queensland (REIQ) June quarter median unit and townhouse price report, released today, found the preliminary volume of sales increased nearly 40 per cent between the June quarter this year and the same period last year.  Sales of units and townhouses across the State have also grown by 15 per cent compared to the March quarter this year.


REIQ CEO Anton Kardash said the Queensland unit market was mirroring the burgeoning strength of the housing market.  “Both the unit and house markets are gathering steam with sales volumes much improved on the same periods in 2012,” he said.  “What is also interesting to note is that the preliminary numbers of unit sales this quarter were only marginally lower than during the strong spring selling season last year. That is, there were only 66 fewer sales this quarter than in the September quarter last year.  In fact, the June quarter is usually the weakest of the four quarters throughout the year. Over the last 12-month period, however, this quarter was actually the second strongest and very nearly wore the crown as the stand-out three-month period of unit sales activity.”

In Brisbane, the numbers of unit and townhouse sales increased 26 per cent compared to the June quarter last year and were up 21 per cent compared to the March quarter this year.  In Brisbane, the median price dipped by 1.3 per cent to $395,000, which is a result that can be classed as steady. Over the year ending June, its median price was down by 0.8 per cent.  Top Brisbane performers which posted median price growth over the quarter and the year included Kangaroo Point, Nundah and West End.

On the Sunshine Coast, there was a significant shift in demand for lower priced properties over the quarter which resulted in the region’s median unit price decreasing. The numbers of unit sales, however, increased significantly compared to the same period last year." 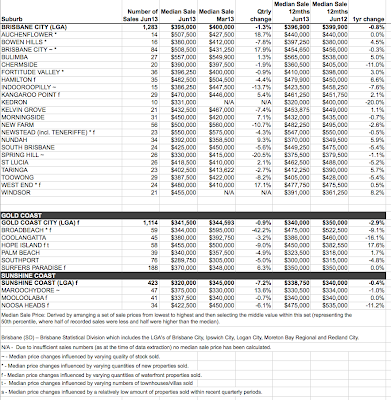