The Midtown, on 127 Charlotte Street, has opened, as a short stay "hotel".  See its "apartment hotel" website.  According to the Place Report, see post below, 47 of the 144 apartments have sold.  According to Booking.com, there are 142 apartments (so I guess two are being used for the onsite manager).  According to RP Data, 28 apartments have settled, but this is often a month or two out of date due to the government updating its records.  The unsold apartments are being marketed with a 5% rental guarantee for 2 years. The apartments are very small, so that may explain why there are a number of buyers from China.  A number of the apartments appear to have been purchased by owner occupiers, or at least the purchasers have given the apartment they purchased as their address.  As the comment for the Place Report notes, I also wonder how a hotel can operate with so few rooms? 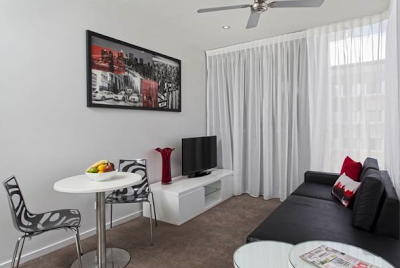 Email ThisBlogThis!Share to TwitterShare to FacebookShare to Pinterest
Labels: hotel, off-the-plan, the midtown