Demand for units and townhouses is increasing across Queensland as buyers flock to this more affordable type of property, according to the Real Estate Institute of Queensland (REIQ).

REIQ CEO Anton Kardash said the data also showed sales increasing for units and townhouses priced under $350,000.  "More than 800 preliminary sales were recorded for properties priced under $250,000, which is a very affordable price for many buyers. This was an increase of nearly 40 per cent on the same period last year.  The greatest numbers of sales was in the $250,000 to $350,000 price bracket, which recorded about 1,250 preliminary sales over the quarter - also an increase on last year.  Units and townhouses continue to be a reasonably priced, and also preferable, option for many buyers who want the convenience of living closer to the city while also keeping a lid on their borrowings."

There was a noticeable shift in demand for lower-priced units and townhouses in Cairns and the Gold Coast over the quarter with both regions recording significant jumps in the numbers of sales of properties for under $250,000.

In Brisbane, the median unit and townhouse price increased 0.6 per cent to $405,000 over the September quarter and also recorded a small positive price result over the year ending September. "Brisbane’s median unit price edged up 0.3 per cent over the year which is a welcome result and one we haven’t witnessed for a year or two now.  This is hopefully the start of the pricing turnaround that we have been anticipating given our property market has been improving throughout the year," said Mr Kardash. 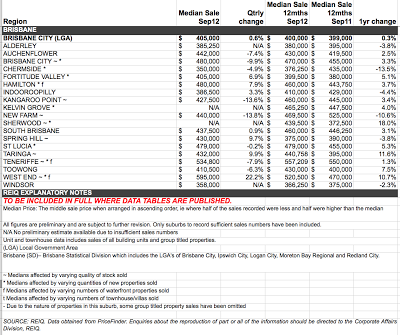